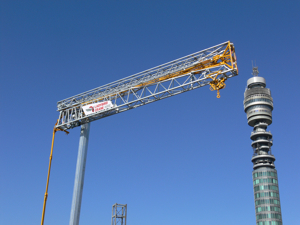 The Hup40-30 started production in January 2017 and Ladybird Cranes ordered the first units destined for the UK.

A machine has gone straight to work in central London at a site where only the Hup40-30 would do. The building work required materials to be lifted over an existing 20m tall structure as part of a major renovation and the only position to site the crane was on the highway. An ordinary IGO self-erecting crane would not have been tall enough to clear the building and a city crane would have placed too high a loading onto the highway.

The Hup40-30 was erected in a single day on specialist road mats and is working well. The crane can be folded back to 13m at the end of the day to reduce oversailing whilst in free-slew, ideal for a city location. 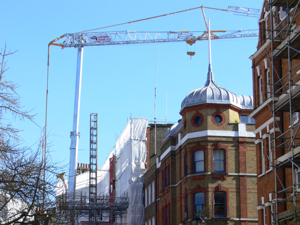 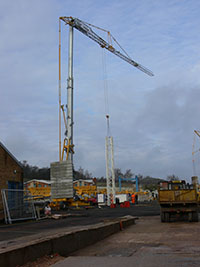 We have added the new Hup32-27 cranes to our hire fleet. One new unit is already out on hire and another is erected in our yard for initial testing and to erect a permanent yard crane.

The Hup32-27 is the replacement to the popular IGO36 but has the advantage of 27m of height under the hook allowing it to work on taller buildings and work above most trees. 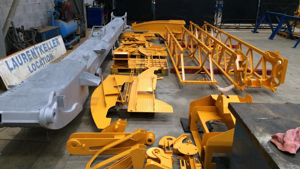 We have started a program to refurbish older cranes by sending cranes back to the manufacturer's factory for complete rebuilds. The program includes the replacement of slew ring bolts, pendant ropes, and other worn items. All motors have the bearings replaced and are rewound and the electrical cabinet is completely disassembled and rebuilt. Cosmetically the crane is stripped down, repainted and returned looking as good as new. 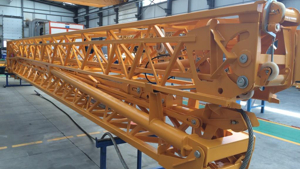 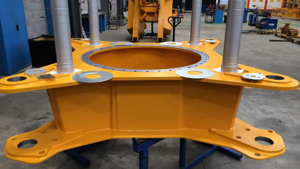 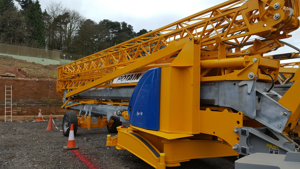 The first of Potain's innovative new telescopic mast self-erecting cranes will arrive in the UK in June 2016. The first HUP32-27 will arrive for the Vertikal trade show before starting work in Ladybird Cranes' hire fleet.

The HUP32-27 is the first crane in a completely new range of cranes set to take over from the IGO range of cranes. The HUP's most impressive feature is a telescopic mast that allows increased height under hook of up to 27m. This will allow the cranes to work on buildings up to 7-8 stories in height and work over the top of high trees and over other self-erecting cranes on the same site.

Other features include a high speed hoisting winch, more precise slewing controls and full colour display on the handset to give the driver better information and feedback.

As part of our rolling fleet replacement program we have added 2 new Potain IGO42 tower cranes to our hire fleet to replace our original HD40 cranes. The IGO42s have a 36m reach and retain the HD40s compact base with 4.2m centres on the feet and a 2.5m slew radius. The new cranes boast the same technology as the rest of our IGO hire fleet including processor controlled safety systems, full data feedback on the radio remote and optimising inverter controlled motors.

IGO42 newly installed on site in Dover, it's raining!

As part of our long term plans to provide a high quality service to our customers we have started work to renovate and move into a newly built yard facility. On the site of a former prison, near our existing office in Bromsgrove, we are currently in a demolition phase of work before we build a new workshop and training centre with a view to moving in the spring of 2016.

The new facility will enable us to carry out more complex in-house engineering work, offer a wider range of training course and offer crane storage to our customers and other contractors. It is an exciting time and it is unusual for a new plant yard to be a significant improvement on the buildings that were there before!

For more information on the Potain system go to: Manitowoc -> Cranestar 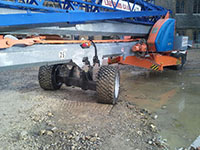 We have invested in specially designed wide wheels for our GAPO transport system. The GAPO is the fastest and safest way of moving our cranes off the low-loader transport and into position on site. However the cranes are heavy and the ground is often poor and to reduce the chance of sinking we are now running on extra wide tyres.

This has made an immediate difference and we are now installing the cranes even more smoothly and safely.

Following a long awaited and much deserved upgrade on our vans it has taken until now to get all the new vans in the same place when the sun is shining. So here it is at last, a picture from our yard showing the equipment that we use to keep the show on the road, now with air-conditioning!

The IGO21, a go anywhere crane

An IGO21 has been used to place glass sheets on the roof of a 9 story building in central London. The crane was chosen for its low weight and point loadings which allowed it to be lifted by the on site tower cranes and sit on the rails of the window cleaning gantry. As part of the job it has had to be repositioned twice allowing for plenty of photo opportunities!
Load more